On Monday, September 26, the Senate passed the Kate Puzey Volunteer Protection Act of 2011 by unanimous consent! You can track the bill here: http://www.govtrack.us/congress/bill.xpd?bill=s112-1280 The next step is to have the bill voted on in the House. If it passes, then the final step is to have the legislation signed into law by President Obama.

First Response Action is grateful for the leadership of Senators Johnny Isakson, R-GA, and Barbara Boxer, D-CA, who introduced this legislation on June 27, 2011. The bipartisan support of these Senators and their staff has been incredible and they have worked tirelessly to get the bill passed. You can read the press releases about the unanimous consent vote for both Isakson and Boxer on their websites.

Thank you to everyone who has called, visited or contacted their representatives to get this important legislation to this level!

This is another big step in the right direction!

Casey and the board of First Response Action

Posted by First Response Action - Casey Frazee at 10:47 AM 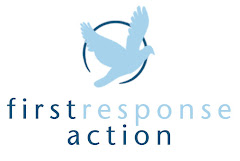 This effort to affect change within Peace Corps will take all of us coming together. If you are a current or former PCV who has experienced sexual assault, rape or any other physical assault during service, please contact us at director@firstresponseaction.org and confidentially share your story. We need to band together to make our voices heard.

Resources for Survivors of Sexual Assault and Rape - US and Global

Thank you to everyone who has pledged their support! Please visit our website for the most up-to-date list. Email director@firstresponseaction.org to add your name to the list of supporters!

How You Can Help

First Response Action - Casey Frazee
I am just another (Returned)Peace Corps Volunteer who wants to make a difference.

I am now joined by four other phenomenal women, who are also RPCVs, who believe that Peace Corps needs to improve it's response to survivors of physical and sexual assault. Profiles of these amazing women can be found on this blog's sidebar.

This blog and it's contents are the opinion of the editor and not that of the U.S. Peace Corps.